About the 1st Cherrybrook Scout Group

1st Cherrybrook Scout Group is a long standing group which was officially formed on 12 December 1989 by a very dedicated committee known at the time as the Cherrybrook Guide/Scout Development Committee.

The Cherrybrook Guide/Scout Development Committee started meeting in 1988 to locate suitable sites for Guide and Scout Halls in the Cherrybrook release area.

When the Scout Group first formed they did not have a hall to meet in. They met in various other Scout halls in the area as far away as Thornleigh. In fact it took six years before their hall was completed.

The District Commissioner obtained the services of a Cub Leader and a Scout Leader both experienced and skilled.

The group recruited more leaders and formed a Hall committee and Fundraising Committee who worked extremely hard over the next four years with Lasagne Drives, Car Washes, Tool Parties, Trivia nights etc. to raise funds and obtain a site to build the hall.

McKinley Place was initially chosen as a suitable site by council and the Scout Association however there were obstacles like objections from the Cherrybrook Creek Protection Group and later after submitting a development application that stated that the hall would only be used 2 nights a week, the group could foresee a planned growth in troop numbers and a change in requirements.

The committee felt that a hall used only 2 nights per week would be a severe waste of money and other resources. They had an imminent need for storage and easy collection of camping gear as well as a need for somewhere to meet.

March 1991 the committee decided to abandon McKinley Place and started investigating new sites. The site at Appletree Drive was a possibility as was a site at Greenway.

July 1992 a development application was submitted to council for the site at Appletree Drive with the Council, Councillors and local residents all in favour of the hall.

March 1993 the development application was approved, building application approved and site being prepared for building in October 1993, the foundation stone was laid on 27 March 1994. The hall was built by volunteers from the group and completed in 1995. 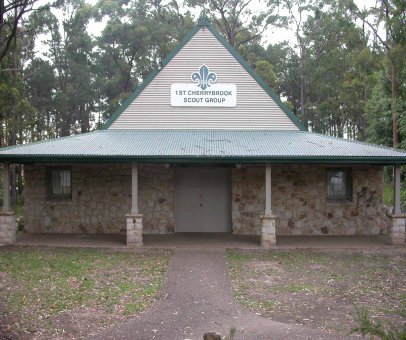 1st Cherrybrook Scout Group Scout hall was officially opened by David Kinchin, chief Commissioner of NSW on 3 December 1995 with a Bar-B-Que on Sunday.

Today 1st Cherrybrook Scout Group is one of the largest Scout groups in New South Wales with a Joey Mob, 2 Cub Packs, a Scout Troop and a Venturer Unit.

Our group prides itself on having very dedicated leaders and each section has several leaders to share the workload and make the group interesting.